The AR4OO series slat profile used with our Domestic range. 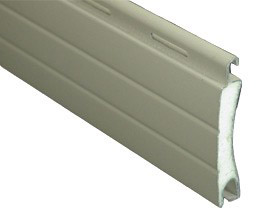 The AR400 is used in our Domestic range, and is coated before forming, which ensures all metal surfaces are protected from corrosion. The shape of the profile has been designed specifically to suit the domestic roller shutter market along with many commercial applications. The slat is roll formed in our Adelaide manufacturing facility to the highest of world standards. The German built roll forming machine is the most advanced of its type in Australia today.

The slats that make up the curtain in the Domestic, Cyclone and Light Commercial Roller Shutters are perforated. The top of the slat has an 8mm hook hinge which attaches to the bottom of the next slat. When the curtain is being raised the slats have a 4mm gap, this gap then allows the curtain to be wound tightly around the round axle. In this gap you will see the perforations which are 15mm x 2mm and are spaced every 15mm. The curtain can be stopped before it is fully extended this gives you the option of being able to see through the curtains perforations and allowing air flow, but when fully closed no light will penetrate.

These perforations are not on our Security Roller Shutters, the Security is an extruded slat profile ideal for commercial use or where added strength and security is required. The profile itself has a hollow section and is available in a 40mm curved slat.

Environmentally safe “Green” foam: OZRoll is both pleased and proud to announce that we are now using a more ‘Green Friendly’ polyurethane foam that is both CFC (Chloroflurocarbon) and HCFC (Hydrochloroflurocarbon) free.
All foams expand with the aid of a ‘blowing’ agent, however what is not commonly known is that most foams used in Australia contain a blowing agent which has an Ozone Depleting Potential (ODP). OZRoll are now leading the way by offering non – ODP foam.
The new ‘Green’ foam actually uses water as the blowing agent, rather than the harmful CFC and HCFC which has proven to have a damaging affect on the environment.
The foam has been tailor made to meet the production requirements of our plant and is a classic example of working together with our supplier to make a world class and environmentally safe product. 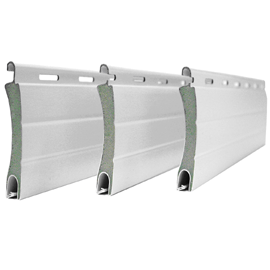 The AR400 HDF is used in our Cyclone range. It is this remarkable increase in density that offers the HDF product such remarkable characteristics. The slat inserts are actually screwed into the foam rather then being stapled as per the standard slats. The ability to screw into the foam offers the extremely remarkable strength
The two part polyurethane chemicals are mixed together at the very last moment before being injected into the open slat section. Once the chemical is mixed a chemical reaction begins instantaneously and the foam begins to transform from a liquid to a solid
The chemical reaction generates heat and in some cases the slat profile will be over 90c at the end of the roll-former.

Slat Inserts Each insert is securely fastened using two 25mm long screws pilot drilled and fixed directly into the High Density Foam. This design incorporated the benefits of the High Density Foam, specially designed restrained slat inserts. These inserts are designed to integrate with the guide section and actually form a positive and structural connection with the guide. The outside wall thickness is actually thicker than the backside. This is to compensate for the offset design of the restrained insert and the fact that in most cases the forces are in the outward direction. We have designed in a small ‘v’ groove on the face of the guide that should always be facing the outside of the shutter.

The shape of the profile has been designed specifically to suit the security roller shutter market. As the slats flex even less than our regular profile, a potential burglar would not be able to change the shape of the slat, removing the risk completely of something going between the slats.

The AE401 series Extruded Aluminium Roller Shutter is manufactured with no tolerance for error and extruded using state of the art extruding equipment, all complying to the toughest international standards.

Bushfire Rated to BAL 40: OZRoll Industries has recently had their AE401 series Extruded Aluminium Roller Shutter Slat tested by the CSIRO for compliance with Clause 14.4 Bushfire Radiant Heat and Ember Attack, of the Australian Building Code AS1530.8.1-2007.
The CSIRO determined the AE401 series Extruded Aluminium Roller Shutter Slat to be compliant with protection against Australian Standards AS3959 Bushfire Attack Level (BAL) 40 risks.
When combined with other house modifications, these are the only slats capable of reducing the risk associated with living in a BAL-40 or BAL-FZ (Flame Zone) area, the most intense threat a home can face from bushfire.

This series slat has the largest prolife of all our slat range, it’s is roll formed with a double walled cavity injected PU foam, with a slight curved 55mm profile, but remarkably it’s the lightest in weight.

The image of the AR551 slat on the left, has a white outlined image of the other slats, (described above) this shows a comparison in size between the other range of slats.

Performance: The AR4OO, AR400 HDF, AR551 and the AE401 series slats profiles are expected to perform satisfactorily 20 years in normal climatic conditions, and when fitted under the specifications listed. During this period, normal weathering of the coating is expected with a reduction in gloss and a gradual uniform colour change over the lifetime of the coating. The coating of the slat profiles carries a nominal 5-year warranty against fading due to normal weathering conditions.