The Greenhouse Affect in Your Home

It is a well-known and undisputed fact that external solar protection devices are superior to an internal system with respect to the energy transmission rate and thus to the room temperature. The fact that the greenhouse effect is responsible for this phenomenon is also generally acknowledged.

The opinion that thermal rays cannot penetrate glass to cause the greenhouse effect is only partly true. The invisible portion of the entire spectrum of solar radiation (wave lengths of approximately 800nm to 2500nm) is around 50 percent. These short-wave rays are also called near-infrared. They can penetrate normal window glass relatively easily. Once the rays have penetrated the window, they are absorbed by the surfaces in the room and then emitted again in the form of heat radiation (far-infrared in wave length range of 5000nm to 50000nm).

It is almost impossible however, for these long wave rays to penetrate the glass.  They are either absorbed by the glazing or reflected back into the interior of the room. It is impossible at any rate for them to return outdoors unimpaired. 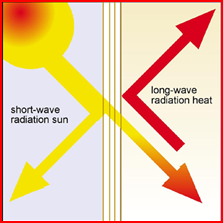 This effect is called heat trap or greenhouse effect

Heat radiation develops on the inside. 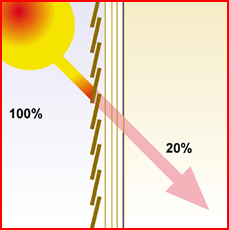 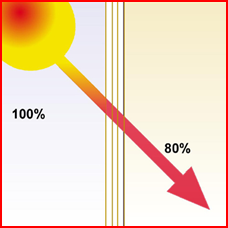